This chart shows the total number of Bitcoin Lightning nodes.

What Is Lightning Network

The Bitcoin blockchain is not able to process a very high number of transactions per second. It is built for security and size rather than speed. This means that using the main Bitcoin blockchain to conduct micropayments for everyday purchases is not practical.

Lightning nodes offer a solution to this by creating a way for bitcoin micropayments to be made to send funds anywhere in the world, instantly.

It is a Layer 2 scaling solution that has its own set of rules, separate from the main Layer 1 blockchain, allowing for much faster payments and much lower fees.

Lightning is still in early stage development but as you can see by the Lightning data live charts on this site, it is growing over time.

Lightning is seen as a very important project for the future growth and success of Bitcoin. It will allow for day-to-day payments to be made in bitcoin which are not practical using the main Bitcoin blockchain.

Here are a list of mobile wallet providers should you be interested in experimenting with the Lightning Network.

Some of these are still in development testing so you should never deposit large amounts of money onto them:

For more in-depth information about the Lightning Network, a comprehensive library of resources is at: 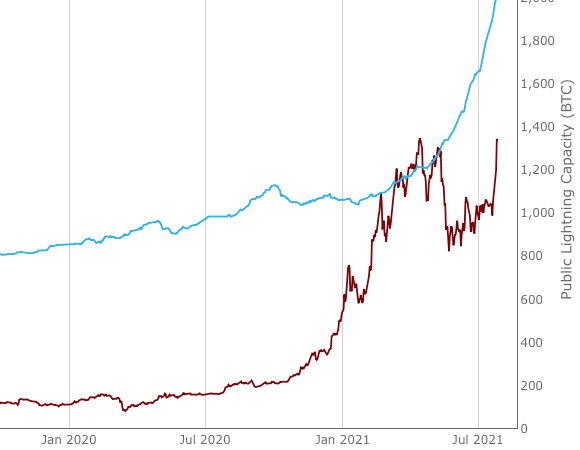 Cumulative capacity held by all nodes on the Lightning Network.